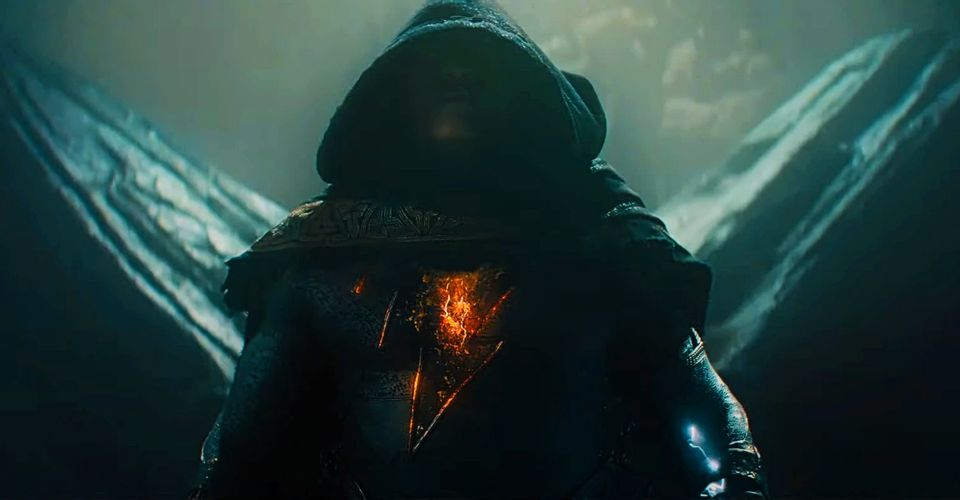 The Black Adam teaser trailer is released, revealing a first look at Dwayne Johnson’s DC hero and the superpowers he possesses.

The Black Adam teaser trailer is released. Dwayne Johnson was originally set to play Black Adam in the first Shazam movie, but early in the development process, it was decided the two characters would lead their own films first. While Zachary Levi and Asher Angel debuted in 2019’s Shazam!, Johnson’s Black Adam movie won’t hit theaters until July 2022. The film is directed by Jaume Collet-Serra, who worked with Johnson on Disney’s summer blockbuster Jungle Cruise.

Joining Johnson in Black Adam are cast members playing heroes of the Justice Society of America, including Noah Centineo as Atom Smasher, Aldis Hodge as Hawkman, Quintessa Swindell as Cyclone, Sarah Shahi as Adrianna Tomaz aka Isis and Pierce Brosnan as Doctor Fate. Aside from a few teases from the set, including a look at Johnson’s Black Adam costume covered in some kind of cloak, little has been revealed from the movie. However, now a new look at the Black Adam movie has been revealed.

During DC FanDome 2021, the Black Adam teaser trailer was unveiled, check it out in the video below. While it’s not a standard teaser trailer, there are a great deal of teases. The first part of the video features some behind-the-scenes footage that includes brief teases of the JSA’s costumes, including logos for Cyclone, Hawkman and Atom Smasher. The second part of the video is a clip from the opening of Black Adam that shows Shahi’s Adrianna Tomaz discovering Johnson’s character and “waking” him up.

The two main takeaways from the Black Adam movie footage is that it teases the character’s “origin” in modern day – insofar as Shahi’s character will have something to do with it. When she was cast, her character was described as a freedom fighter, so it’s possible that Adrianna hopes Black Adam will help in her efforts. Beyond this story setup, the Black Adam footage also shows off at least four of the character’s powers. He has lightning abilities, which he demonstrates by frying one of the men to a crisp, and superspeed – showcased by catching a bullet midair. The other two powers are flight and strength/being bulletproof. Johnson has long teased that the introduction of his Black Adam will change the hierarchy of power in the DCEU and it’s clear just from this short clip that his character will rival both Superman and Shazam in powers.

What remains to be seen, of course, are the powers of the JSA and how exactly they fit into the narrative of Black Adam. While Johnson’s character is no doubt the center focus of the movie and it makes sense he’d be at the center of this very first Black Adam teaser trailer, the movie has a handful of other DC heroes set to appear. It’ll be exciting to see what their costumes look like and how their powers are presented on screen. Brosnan’s Doctor Fate is one of the more highly anticipated of the heroes, though Hodge’s Hawkman and Centineo’s Atom Smasher aren’t too far behind. More will no doubt be revealed when the first proper Black Adam trailer is released – likely sometime next year.