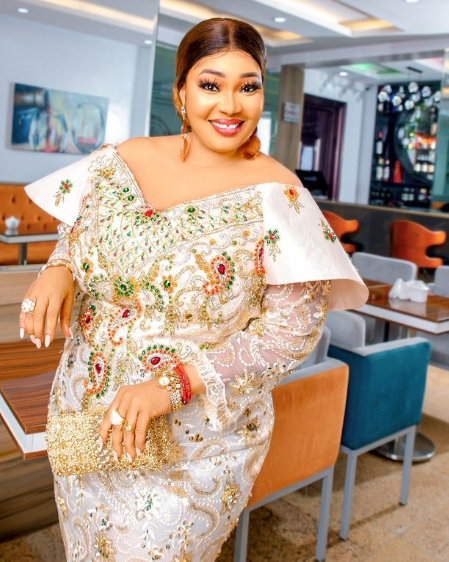 ResQ Promotions. A comprehensive direct marketing & public relations company dedicated to the direct and effective marketing of client’s products and services partners with Dr. Jaiye Kuti, a well known Nollywood actress and producer in cooking up something big for the Nigeria Movie Industry.

Olajide TV was live on the set of this epoch making movie production titled SCARRED and all we could say is WOW! From the set, to light and directing; costume and make up, we could witness a touch of quality production.

Speaking with the associate producer on the set of SCARRED, Adeleye Fabusoro producer of BOROKINI, AWON ALADUN DE, FAMILY FIRST, YORUBA HERITAGE DOCUMENTARY (nominated for AMVCA 2020) and recently LADIRE series (produced in collaboration with HOUSE OF ODUA speaheaded by the OONI OF IFE); he talked about the movie and what the audience should look out for in the movie.

In his word, he said

Also speaking with one of the actors in the movie, TINA MBA, who played the role of NMA OKOYE, she said:

‘Lets talk about the story itself, SCARED. It’s something I find interesting ,

This particular kind of story is something that hasn’t been touched. Yes, we have seen all kind of scars like rape etc but this one is totally different and unique.’

SCARRED movie project is a premium project, it’s a project that shows us as we are. It’s not a project that tries to paint Nigeria like some places that is not attainable.

When asked about his experience working on the set of SCARRED movie, the Director, TOPE ALAKE one of the Nollywood most skillfull, talented and award winning Director, has this to say:

“When I got the script from the producer Adeleye Fabusoro who happens to be a long time friend, he told me I will be working with Jaye kuti I was excited because she is someone I admire a lot.

Well its been awesome since the beginning of this project with this set of cast. People like Mofe Duncan, Tope Olowoniyan, Jennifer Obodo, Baj Adebule, Tina Mba, and Jaye Kuti herself, its been awesome. I’ve worked with some of the cast before but with Jaiye Kuti, its my first time and she has brought all of her energy, her confidence and offcourse, her good looks. Also my crew has been awesome from my D.O.Ps, Ladipo Abiola, Dare Abiola and all other crew members-No doubt, we had regular Nollywood challenges but its been awesome and I can’t wait for you all to see the magic we are making”

I am sure when you watch SCARRED you can pick one or two things from the movie. We can’t just wait for the premiere of this huge project.’